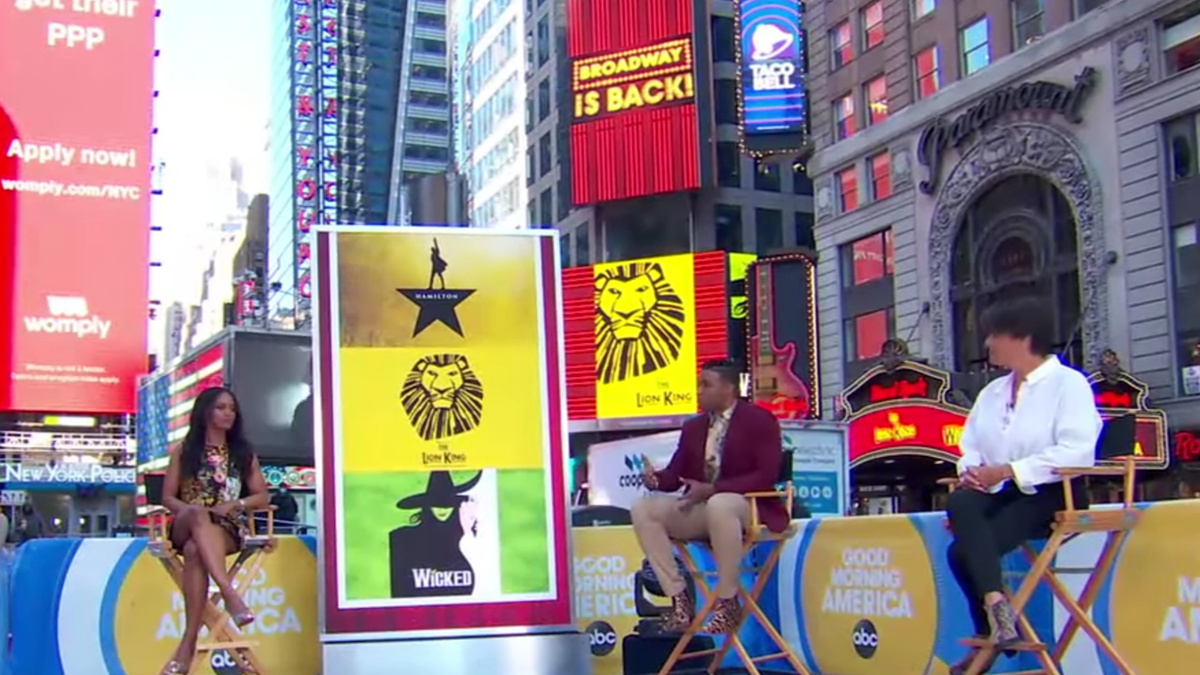 Oh, what a celebration we’ll have today! Broadway’s Krystal Joy Brown (Hamilton), L. Steven Taylor (The Lion King) and Alexandra Billings (Wicked) came together on May 11 to announce on Good Morning America that the three hit musicals will all resume Broadway performances on September 14. The trio sat down with co-host Michael Strahan to talk about their excitement and steps forward.

At the time of the shutdown, Brown was playing Eliza Schuyler in Hamilton. Now it’s been 14 months since her last performance, and Brown is looking ahead. “We’re making sure we, as a brand, are pushing forward social justice,” she said. “We realized that we could come together as a company and do some amazing work. We created #Ham4Progress to make sure there are voting rights and we’re giving scholarships, all kinds of things to continue show equity and inclusivity in our community. We hope this is the first step for Broadway to continue this kind of work because we can make absolute change. We are representing so many people and they can see us. Broadway being accessible, Broadway being diverse and inclusive is an amazing thing for all of us.”

For Bilings, who became the first openly transgender actress to play the role of Madame Morrible, she knows there is power that comes with representation. “There were an enormous amount of trans youth getting a hold of me,” she said. “They would come to the show and stand and ask for autographs with their parents. It was the first time they had ever seen another transgender person before in their lives…seeing yourself reflected in art for the very first time is extraordinory, both for myself and for them.”

For 15 years Taylor has taken up residence at Pride Rock in The Lion King, and he can’t wait for the Broadway blockbuster to return. “At Disney Theatrical we’ve been partnering with a lot of organizations in the community to make sure were actually supporting impactful systemic change, so that when we come back, we’re not only returning, but returning stronger and better than we have before,” he said. “My favorite thing is to stand there on Pride Rock and watch the grown men cry during ‘Circle of Life.’ Rafiki’s opening call is really a call for a community to come together and that’s what this is symbolic of—Broadway coming back is really a community coming back.”

Watch the interviews below!