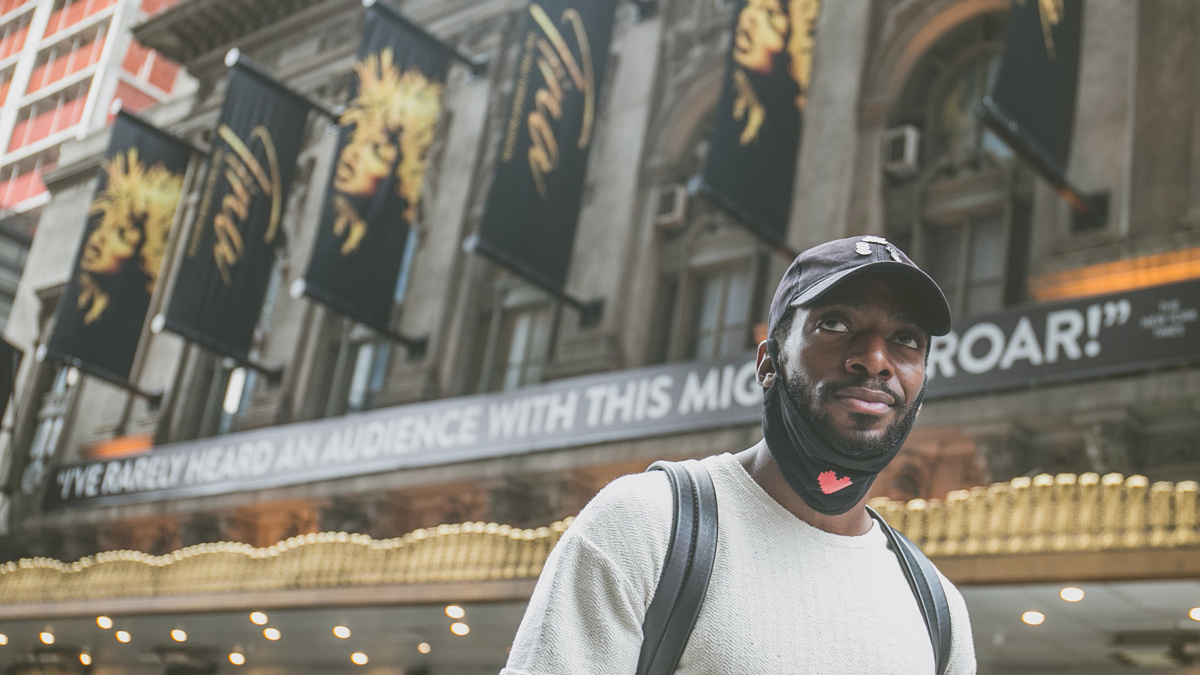 Tina‘s Daniel J. Watts on Learning to Slow Down and How Broadway Is Like the NBA

Living near the theater district during the Broadway shutdown, photographer and performer Matthew Stocke has been haunted walking past the empty palaces sitting in repose, waiting for the lights and stars to return. In this new Broadway.com photo feature, he reunites members of the theater community with their Broadway home #AwayFromHome.

With an impressive roster of Broadway credits to his name (In the Heights, Memphis, Hamilton, to name a few), Daniel J. Watts stepped into the spotlight as Tina Turner's ex-husband Ike Turner in Tina: The Tina Turner Musical just months ahead of the Broadway shutdown. After finishing a lauded run of his own show The Jam: Only Child at the Public Theater in January, Watts was readying himself for the end of the season. Though it seems much of the world (like Broadway) is on pause as a result of the coronavirus crisis, something has started within Watts. He has presented additional installments of The Jam, a transformative display of music, dance, spoken word and storytelling, via Instagram and has contributed to important conversations about Broadway's past and future. Here, he likens his time at Tina to the NBA and reveals the inspiration behind his brand new show.

"Performing was always a fun thing, but even when I went to college, I didn’t know how far it could take me. It was 9/11 when I realized the power of it. Classes got canceled, but the Shenandoah Shakespeare Company had come to our school. We had an email saying it was still mandatory for us to go to their master class and then to see their performance of As You Like It that night. It’s one of the most incredible performances I’ve ever seen. When it was over, I went outside and was like ‘Where is everybody?’ It was a Tuesday. Usually it would be bustling, and then I realized, ‘Oh, this took me out of that national tragedy.’ That’s when I saw what art could do. It can be—not an escape—but a refuge….Between shows on the two-show day [before the shutdown], we found out that the NBA was canceling its season. That’s when I knew this was a dire situation. Broadway is like the NBA of our field. I’m happy to be the Scottie Pippen to Adrienne Warren’s Michael Jordan. [At Tina], I loved seeing Black women in the audience leave the show with such exhilaration and pride. Seeing someone like a Tina Turner, the resilience of this person, how they triumphed through tremendous adversity—people would just be beaming after that show….I was firing on all cylinders before we shut down: I had done a one-man show. Tony season was gearing up. Actually, a mentor of mine—Byron Easley—always said to me as a compliment, ‘You don’t let paint dry! You’ve always got something going on.' I've learned to let paint dry, to slow down. It’s not going anywhere, whatever it is—and if it is, it’s not for you….[As a Broadway performer,] there’s a navigating of the self that you have to do constantly. Right now, I am fine with that, but I am also constantly wondering how long I want to do this. Theater is something that saved my life: it’s helped me navigate certain relationships. It’s helped me find peace in childhood traumas. In this time, I have also been really wrapping my brain around that happens when you become enslaved by the thing that brought you freedom in the first place. I’m actually writing a show about that. [When Broadway returns], I’m looking forward to us interacting in a better way than we ever have before."