The touring production of the hit Broadway bio-musical On Your Feet! is on the road and starring two of theater's brightest stars. Christie Prades (as Gloria Estefan) and Mauricio Martinez (as Emilio Estefan) both made their Broadway debuts in the show and now they're conga-ing across the country and bringing the music of the 26-time Grammy-winning husband-and-wife team to audiences in over 30 cities. Their real-life friendship and natural on-stage chemistry go a long way in making the On Your Feet! experience one theatergoers will never forget. Broadway.com got the stars dolled up for an exclusive photo shoot and chat about their connection, why it's an honor to portray the Estefans and what they enjoy most about bringing this jukebox musical across America.

Hi friends! So tell me: How is the touring life treating you?

MAURICIO: It's treating me well! I've never toured before, so I'm getting used to it slowly but surely. There's a scene in the show where Gloria says to Emilio, "I'm tired. Two years on the road, cameras, hotel rooms, airports…" and now I'm like yep, that's going to be next year. [Laughs.] I can finally relate to that line a little bit more because it's a lot, but it's good.

CHRISTIE: I was not expecting it to be as incredible as it's going right now! We've been very lucky. The audiences have been reacting to the show so positively and with so much energy. We couldn't have asked for a better start to this tour. I'm really, really enjoying it.

MAURICIO: Yes, at the end of the day, it's a new experience for us and we're loving it. I'm loving getting to know this country better and going to places that I've never visited.

How does doing the show on the road compare to when you were performing it on Broadway?

CHRISTIE: I'm obsessed with the fact that we always get an opening night in each new city. It's a new adrenaline rush every single week and it really brings me back to square one with the show. I never get tired of it, and that's the best part about it.

I remember when the show launched in Miami and, Mauricio, when you said the line, "This is what an American looks like," the audience went wild!

MAURICIO: Oh, yes! You could tell that audience was filled with Latinos! [Laughs.] It's a story about them, so it's relatable to them. But that line always gets a reaction, even on Broadway. And I don't think it's just a Latino thing or an immigrant thing. I think it speaks to all Americans. That speech is so well-written and it resonates with the audience in a beautiful way. 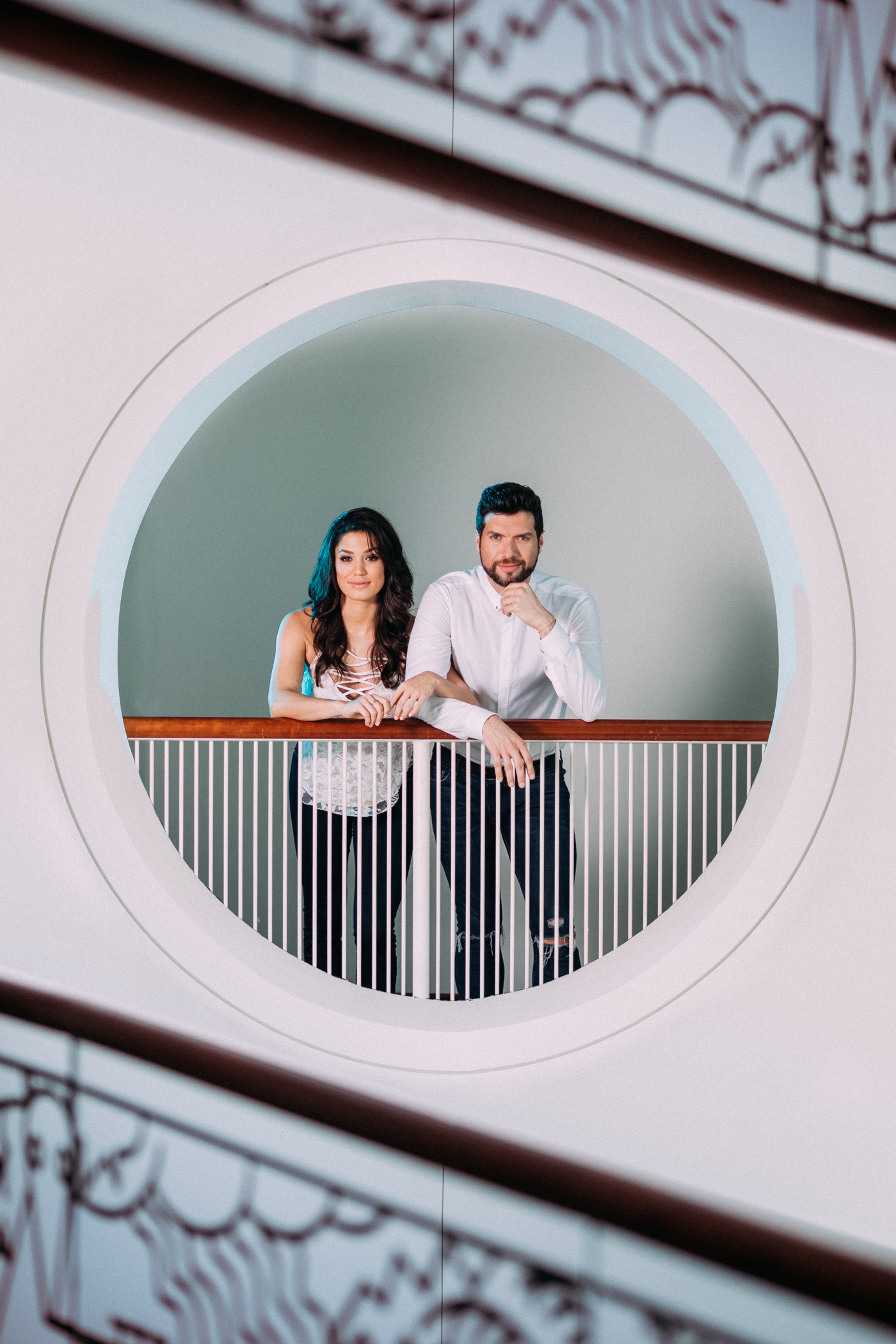 Christie, what was your first impression of Mauricio when you two met?

CHRISTIE: I thought he was so sweet! He'll literally give you a cavity once you meet him because he's the sweetest guy. He's very giving and approachable. Just to know that a good human was going to be by my side…I feel like that was the most important thing. I knew everything else would fall into place. And he was very sweet to my parents and that made a big difference for me.

What about you, Mauricio? What was your first impression of Christie?

MAURICIO: That's she's so beautiful. That's the first thing that came to my mind, like wow this is a striking girl. I met her last year through our mutual friend Doreen Montalvo [who played Gloria Fajardo in the Broadway production]. Christie had just gone on as Gloria for the first time, understudying the role for Ana Villafañe, and it was like she could see the future because we were talking about the show and she said, "Would you do the tour?" And I'm like, "Oh yeah, I would!" And here we are a year later from that dinner with her parents and Doreen, starring in the tour, which is wild to me.

What do you admire most about her?

MAURICIO: The way she takes care of herself. She's very aware of taking care of her body and resting her voice. She's such a professional in that respect and I love that about her. She takes the job very seriously and she always gives 100 percent. She delivers every night. I think we're cut from the same cloth because we both have the same discipline and the same rituals and the same love of taking care of our bodies and our voices. That's very refreshing and reassuring, and I know I can trust her.

CHRISTIE: I admire his genuine positivity about everything. Even if there's something wrong or little glitches here and there, he's always like, "It's going to be great. It's going to be amazing because you know that we can do this." I think that's one of the most important qualities to have, especially on the road. You have to have that center and that focus. We're a unit and we have each other's backs. It's good to have him by my side because I'm usually positive, too, but it would be hard if I didn't have someone next to me with that same kind of mentality.

What's the key, for both of you, to becoming your characters on stage?

CHRISTIE: I don't feel like Gloria until I hear that first bang of the drum from the band for "Rhythm Is Gonna Get You." That's when I'm like, "OK, now I'm Gloria."

MAURICIO: When I put on Emilio's earring, in my dressing room, something just clicks. It's hard to explain but it even happened on Broadway. As soon as I put the earring on, I'm like, "OK, there he is. There's Emilio." And as soon as I start talking and I listen to myself talking with Emilio's accent, that's when I know. And of course the white shorts! [Laughs.]

CHRISTIE: I try to remember that this is not just a character I'm playing. She's a woman who grew up in a different time and broke all the barriers. I try to remember all the trials and tribulations she's had and to be as honest as possible. And when I hear those drums bang is when I put all those pieces together. I have the earrings, I have the corset, I have a wig, I have everything. But that's the process, that's the order.

Theater people are notoriously superstitious. Do you have any rituals that you do before you go out on stage?

MAURICIO: I always say a little prayer behind the curtain. I take five minutes to just meditate and breathe. And I can feel the audience's energy and I can hear them talking and I'm like, "OK, we're going to feed off of each other." That's something that I've been doing since Broadway.

CHRISTIE: I've noticed that we definitely go into our own little zone. I always see him on stage and I'm on the other side and we're just kind of taking in the audience. We try to do a circle before the show. It's a little more difficult now on the road because we're trying to get situated with our dressers and hair and makeup people. Everybody acknowledges everyone, says hi, hugs each other, tells them to have a great show. And we always connect with our band because they are the Sound Machine and they've traveled everywhere with Gloria.

As an audience member, watching you two on stage together, as Gloria and Emilio, is such an enjoyable and believable experience. Christie, what's your favorite on-stage moment with Mauricio?

CHRISTIE: I love "Here We Are," which is their first date at the Mexican restaurant. We're just playing around and he steals the kiss and everything is very sweet. We always get a good laugh and people really see the connection between the two of them—and us—and I thoroughly enjoy hanging with him out there.

MAURICIO: My favorite moment is the Mexican restaurant scene, too. We're so playful there! [Laughs.] That scene is so sweet and funny and honest and we can enjoy that time. It's a very fun part of the show.

CHRISTIE: And I would have to say that "1-2-3" is a lot of fun, and you get to see Gloria branch out and win Emilio over. We always end up laughing when we look at each other in those moments and we really start connecting there. So, I enjoy going through that process every night with him.

How has playing these characters—who are real, living people very much involved with this show—affected you in your own life?

CHRISTIE: I've gained a new perspective on life. I think we put celebrities and artists on a pedestal and we just see them as entertainers that don't breathe the same air we do, that don't shower the same way we do, that don't sleep the same way. We look at them as like aliens, in a sense. And having met Gloria and portraying her as a young woman with feelings, and a family, and ups and downs of her own…it has affected me in the sense of understanding the "artist" as real person.

MAURICIO: It has affected me in beautiful ways, too. I now call Emilio a friend and he's so loving and caring and he's there for me whenever I need him. When I was fighting a cold, he got a doctor and an I.V. for me, and he sent me honey and tea. I'm honoring his life and his work and his story. He made it. He conquered the American dream. And he never stopped. He always sees the positive in life, and I love that about him. I'm a Latino. I'm an immigrant. I'm a Mexican artist living and working in the United States. This story inspires me every day and it has changed the way I see life because I'm going through it right now. I'm on a work visa. I'm applying for my green card. I'm living those words I say every night. In the show, when the record executive says there's no such thing as a crossover, in my head I'm like, "Yes there is! I'm crossing over. This is my crossover project. I'm crossing over to America!" You know what I mean? I'm living it.