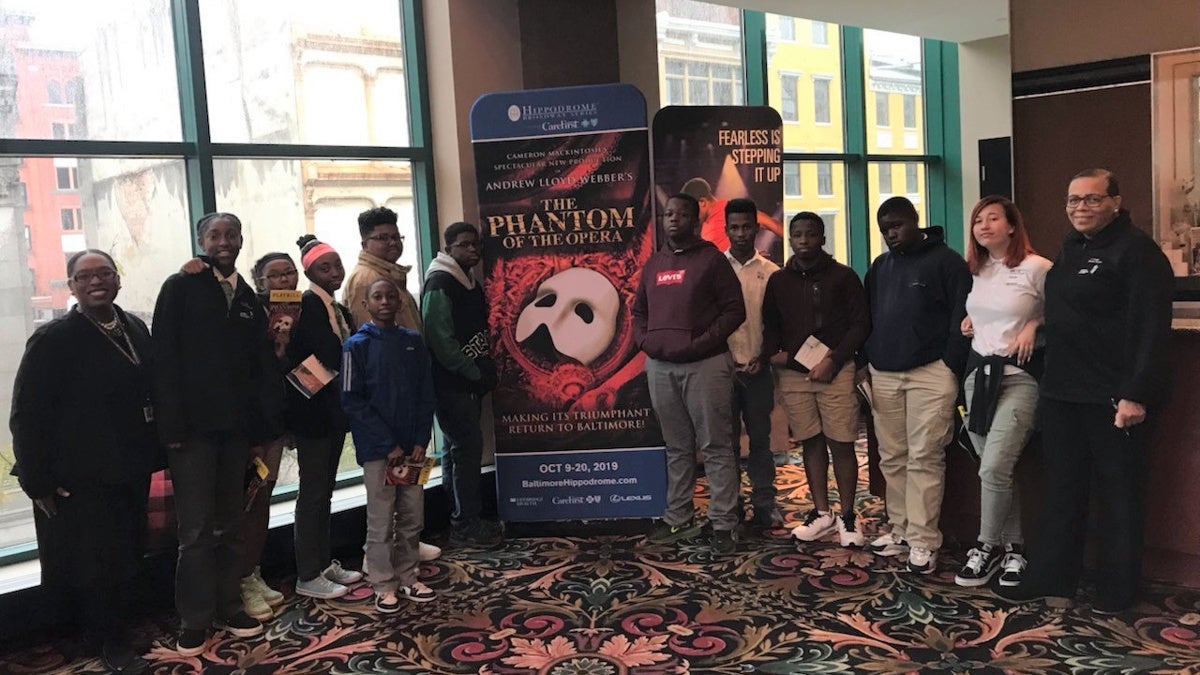 Baltimore’s Hippodrome & The Phantom of the Opera Host Over 2,000 Students at Special Matinee

The North American touring production of Andrew Lloyd Webber’s The Phantom of the Opera is currently playing Baltimore’s Hippodrome Theatre through October 20, and on October 16 the Hippodrome Foundation (HFI), the presenting partner of Broadway Across America in Charm City, hosted an all-student matinee that was attended by 2,200 Baltimore city students who experienced their first Broadway musical.

The special student performance, which was sponsored by the Baltimore Gas and Electric Company (BGE), hosted middle and high school students from nineteen different schools in the city. The vast majority of the students who attended had never been to The Hippodrome Theatre or seen a Broadway performance before.

“The all-student matinee days at the historic Hippodrome Theatre are my favorite,” said Ron Legler, President of the France-Merrick Performing Arts Center. “They remind me how transformative Broadway shows can be. The waves of love pour over all who attend on both sides of the proscenium. The kids’ energy and response to the show is infectious and overwhelming!”

Performers from The Phantom of the Opera tour, including Derrick Davis (Phantom), Emma Grimsley (Christine Daaé) and SarahGrace Mariani (Meg Giry), shared videos to their Instagram Stories during the show’s intermission, where they described the energy coming from the students in the theater as “incredible,” “amazing” and “the best.” “Thanks, kids! Thanks for the screams. We love ’em, we love you. Happy day,” declared Mariani, in her Insta Story.

“In opening comments, I reminded our young guests that many actors and actresses over the years have told me that they decided to pursue a career in the arts after attending a performance like this one,” said Olive Waxter, Executive Director of the Hippodrome Foundation. “So, it was especially exciting to invite the students and expose them to the world of Broadway. I hope The Hippodrome Theatre will welcome one or more of them sometime in the future in a professional capacity.”

Davis, who’s the third African-American to play the Phantom and the first to play the Phantom on a national tour, recently appeared on an episode of Broadway.com’s #LiveAtFive, where he said playing the Phantom is a full-circle moment for him because The Phantom of the Opera was the first show he ever saw. “My parents took me to see it as a kid,” he said. “Like so many people in the United States that I’ve come to meet, it was the show that introduced me to musical theater. I didn’t even clock the idea that I could play the Phantom for years and years because it hasn’t traditionally been held by a person of color, but this creative team is genius and opened up the possibilities.”

In addition to the matinee, the Hippodrome Foundation solicited other foundations to support academic programming related to the matinee since the Hippodrome Foundation is committed to linking touring Broadway to mandatory state curriculum. For The Phantom of the Opera, students are comparing and contrasting artistic style and characters within Edgar Allen Poe’s The Masque of the Red Death and Lloyd Webber’s legendary musical.

“The Hippodrome Foundation is committed to sharing the assets of The Hippodrome Theatre with our entire community. Thanks to BGE, we were able to bring more than 2,000 students to The Phantom of the Opera,” said Waxter. “Special thanks to the Broadway Across America team in Baltimore, as well as the company for inspiring so many young people and helping our foundation raise the curtain for Baltimore youth.”

The Hippodrome Foundation, Inc. is a 501(c)3, non profit organization established in Baltimore, Maryland in 1976. Formerly known as the Baltimore Center for the Performing Arts (BCPA), the foundation was originally created to present live theater at the Morris A. Mechanic Theatre. Over the years, HFI has evolved into its present incarnation as the largest presenter of Broadway in Baltimore (and Maryland) working in partnership with Broadway Across America to bring in the very best possible shows. Hippodrome Foundation, Inc. is housed in offices in the spectacular France-Merrick Performing Arts Center, which is made up of more than 160,000 square feet of performance venues, production support spaces, public spaces, rehearsal halls, studios, conference rooms, and administration support spaces.

To find out when The Phantom of the Opera tour is headed to your city and to get tickets, visit BroadwayAcrossAmerica.com.

More Buzz About The Phantom of the Opera